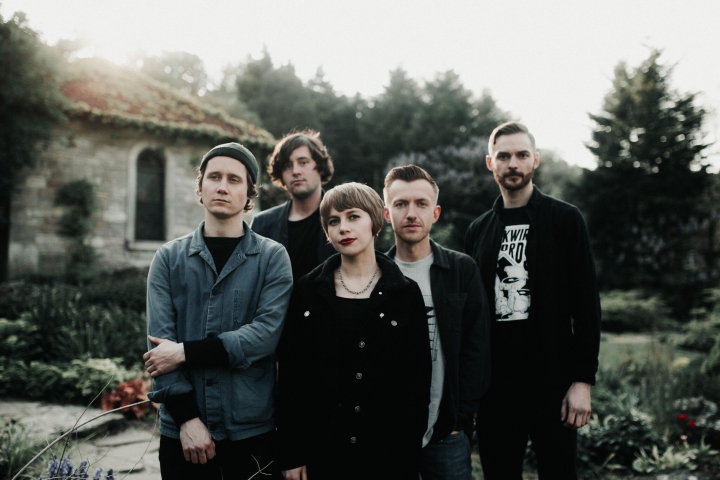 Rolo Tomassi may be one of the most singular bands in today’s heavy-music scene. Since the band’s inception in 2005 they never relented from experimenting and pushing their music to new extents while confidently keeping a distinct recognizable sound. Never being too concerned about fitting their music in a box, they incorporate elements from genre’s all across the board with mathcore, hardcore punk, jazz and progressive rock being some of them. I have been lucky enough to catch their latest show at „The Borderline“ in London on the 4th of November 2017.

The band has previously spent months working on their upcoming record and only played a handful of shows at festivals earlier this year. All of the members seemed eager to perform again delivering an energetic and battering set. Seeing Rolo Tomassi live really paints a picture of the band’s musical capabilities. Chris Clayford’s guitar – and Nathan Fairweather’s bass-work are feeding off of each other, while exchanging leading-roles. Tom Pitts‘ drumming confidently leads the band through their complex and constantly changing time signatures. Laying the melodic and atmospheric groundwork with his keyboard and synthesizers, James Spence every now and then steps up to deliver his mostly screamed vocals. While most of the time tearing through the sound with her brutal screams, Eva Spence also complements the music’s quieter parts utilizing her beautiful clean singing. The consequence of all this is a stunning musical atmosphere that feels like a complex, yet seamless puzzle and the crowd is losing their mind over it.

Video: „Rolo Tomassi – All That Has Gone Before – LIVE @ The Borderline 2017“. Quelle: YouTube, godofallthings

Founding member James Spence was kind enough to answer a few questions I proposed regarding the group’s future touring plans and their upcoming studio album „Time Will Die And Love Will Bury It“:

To start things off let’s talk a bit about your recent show at „The Borderline“ in London; you seemed pretty energetic playing live in front of a crowd again. Do you feel similarly eager commiting to touring after having spent some time in the studio?

James Spence: „That gig definitely felt like a huge release for us. Having spent a lot of time in the studio and rehearsal rooms over the summer we were really desperate to get back out in front of a real audience to remind them what we could do and to remind ourselves what it feels like! Touring is the next logical step. We love to tour, to visit countries and meet and play for new people. I can’t wait to get back into the regular routine of being on the road. Its a big part of my life and we’ve had quite a break from it.“

Your London show was also the live-premiere for two songs from your upcoming album. With „Rituals“ played as the heavy opener song and „The Hollow Hour“ being more complex and featuring deeper shifts in tone and melody. What was it like playing the new material to a live audience?

James Spence: „It was great! Rituals went down especially well as we’d released it ahead of the concert. It was met with a similar reaction to a lot of older material which was a great sign. People connected with its energy almost instantly. The Hollow Hour is a considerably different track and people sat back for that to take it in which is exactly what we wanted. I was glad to have the opportunity to offer people a preview of what we’ve been working on.“

Do you plan to incoorperate more new songs into your live shows, as the release date for the record is coming closer? What other tracks are you most excited about to perform in the future?

James Spence: „For now, I think we’ll just be playing these two ahead of the release of the album. The only touring we have coming up is in the US and we’ve never played any of the cities we’ll be visiting on that tour so it’ll be a nice chance to offer up a mix of our back catalogue. When the album is out and the touring for the album begins, we’ll look to introduce more new material. I’m particularly looking forward to playing A Flood Of Light and Contretemps. I think they’ll sit nicely amongst the rest of what we play and show a real development in the songwriting to my mind.“

What can I as the listener expect from „Time Will Die And Love Will Bury It“? How would you compare it musically and perhaps narratively to your previous record „Grievances“?

James Spence: „I think as a whole it has a lot more colour to it. Grievances is an album I am still immensely proud of but the overall feel of the aesthetic is very monochromatic. We worked on incorporating ideas, that would have previously been interludes on a Rolo album, into the songs. The song writing is a lot more considered. We explored each song to its full potential and brought in a range of influences that you’ll hear across our back catalogue. Everything was pushed to its extreme so the heavy moments are their heaviest ever, the poppy moments more poppy than we’ve done before and the progressive songs that would usually just close our albums are scattered across the entire record. While it wasn’t written to flow as one piece, like we intend with Astraea and Grievances, I think its our most cohesive album to date.“

Was there something new or different in writing the new album or in how it was recorded or produced?

James Spence: „We demoed the whole thing really comprehensively which was a great help in developing the songs and make sure we were well prepared ahead of going into the studio. This was something we did to a slightly more basic degree with Grievances too but we took it to the next level with this. We all have the capabilities of recording at home and with Chris living in a different city to the rest of us, this was really crucial to the whole process. Myself, Eva and Tom did a lot of work on the vocals ahead of going into the studio and then Lewis (Johns, producer) also got involved with this when we were recording. Our relationship with him has reached a point where I almost consider him to be a collaborator as much as a producer. He really stepped his game up with the production on this album! With the writing in general, we had a lot of songs that came together quite quickly or were taken care of by just one member, which is unusual for us but a lot of the songs were fleshed out as a group which is what we usually do.

Rolo Tomassi has announced two upcoming tours. One being a US tour throughout this year’s December. The other being a Europe tour featuring shows in Hungary, Slovakia, the Czech Republic, Germany, the Netherlands and the UK in late March till early April 2018. Their upcoming record „Time Will Die And Love Will Bury It“ will release on March 2nd, 2018. Pre-orders are available on  lovewillburyit.com.